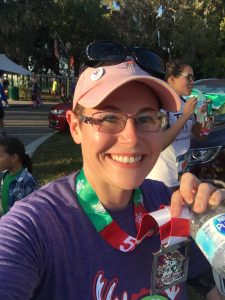 Whenever we enter a new year, it’s human nature to look back and do a little reflecting on the one that’s just passed, and then start dreaming about the future.

2017 was a great year for me. It’s funny, because every year you see lots of people grouching and groaning about how badly things went, but I honestly don’t feel that way about the past year and I haven’t felt that way for a good three New Year’s now. I do not look back at last year and regret what might have been. I look back and see all the things I did, and I’m really proud of my accomplishments.

Each year I’ve been keto, I’ve achieved something new. My first keto year, I was just happy to have lost a whole pile of weight and -finally!- faithfully maintained the lifestyle for a good seven or eight months. That was the longest period, to that point, that I’d been able to maintain any kind of healthy lifestyle change, so it was a big deal. The following year, I was heading into my second full year of being keto and our gracious host, Mr. Ketovangelist, asked me to begin contributing to this very blog. I was over the moon at that! Not only had I accomplished something, someone actually wants to read all about it!

This year is another biggie for me. Not only am I now a Ketovangelist Lifestyle Coach- which is a huge step for me as a major introvert- I did something I never in my life thought I would do.

I’m sure that sounds silly to a lot of folks reading. I mean, most children can and do run pretty regularly. But it is a huge deal to me.

My little brother runs- which I’ve always admired- but he’s been athletic since forever, and I kind of just wrote off my inability as being due to my more bookish nature. I just wasn’t cut out for sports, is all. I’m better at reading and writing and singing.

I wasn’t diagnosed as asthmatic until my very early 30s, but I highly suspect that had I been checked out properly for the condition when I was younger I likely would have been using a rescue inhaler much earlier in life. I can remember being very young, probably middle school age, and being asked to run a lap around the track at school. You know, those oval ones where once around the thing is a quarter mile? I was also quite fit at the time, and yet I was the last one to make it around. I could barely get halfway down one side of the oval before my lungs would burn and I felt like I was choking.

This kind of thing never went away, no matter how hard I tried or how long I practiced. I’ve never been able to run or sustain any major cardiovascular activity for more than a few minutes at a time regardless of how fat or thin I was. I remember taking tap in high school for a musical I was in, and being completely winded after just a few minutes of practicing my step-shuffle-ball-chains. Again, I was thin and healthy. There was no real reason that I knew of that I should have such a hard time doing something that even the overweight kids in my class were flying through without missing a beat.

And yet, I couldn’t breathe.

The first real jarring indication I had that I had any respiratory conditions manifested in my teens, when I started developing a pretty serious illness right around Christmas time each year. It took a couple of years to suss out, but it turns out that I am very allergic to the mold and spores and such that come along with real Christmas trees. It really shouldn’t have been a surprise because serious allergies and respiratory infections run on my dad’s side of the family, so we just dumped the real tree in favor of a fake one and went on with life.

I had allergies. No biggie.

Except when it was. Those allergies got progressively worse each year. I remember one year, when I was working retail, when we had big visit from corporate that required all management to be there from open to close every day, for seven days straight. Guess who had a major bronchial infection and pneumonia? Guess who was an idiot and worked throughout it anyway? Yes, I’m raising my hand on both counts. I’ve got some gnarly stories about trying to organize shoe and handbag displays while feeling the full effects of the hydrocodone syrup the doctors gave me. I promise, I did not operate any heavy machinery while taking it. I waited until I was done operating the machinery and then I took it.

All of this basically culminates in me spending several years suffering through massive sinus and respiratory infections, as well as bouts of bronchitis and pneumonia, three to four times a year for at least five or six years.

One day, I found myself at the walk-in clinic suffering from yet another round of infection. But that’s not what scared me enough to go to the emergency clinic. What got me there was driving down the road with my children in the car, and feeling like I was going to pass out because I could barely breathe. As my respiratory episodes worsened, I started feeling like I had a ton of bricks on my chest, pressing down on my lungs. I was prescribed an emergency inhaler, which provided immediate relief, and ordered to see my regular doctor for respiratory testing, which I did.

After spending my whole life fighting off allergies and sinus infections and always feeling like an out of shape doofus because I couldn’t do aerobics or even run for five feet at a time without choking, I finally had an explanation. I had severe allergies, and allergy-induced asthma. I spent the next several years with a rescue inhaler always within reach.

To be honest, it was a relief to finally know what the heck was wrong with me. At the same time, it was fairly depressing to realize that all of these things I could never really do were things I would never do because I simply wasn’t capable of doing them.

When I fast-forward to today, it seems very surreal looking back on these things.

After almost three years keto- and with the help of the anti-inflammatory nature of our protocol- I have not had even one sinus or bronchial infection. Not. One. Seriously.

Further, I’m now managing my allergies with a one daily OTC medication, and they’ve improved so greatly that I have not used a rescue inhaler since maybe two months into my keto journey. Not only have I kicked my need for an inhaler, I have gone so long without an attack and my testing has all come back so well that I’ve had asthma removed from my chart. That’s right. I am officially no longer an asthmatic.

But that’s not the end of the story. This story is about visions and decisions.

Back in May, right around my two-year Ketoversary, the ever-excellent Rekka Jay challenged me to a step contest through my fitness tracking app. I’m never one to turn down a little friendly rivalry, so I joined in. And I killed it. No joke, I was doing laps around my living room to win that challenge. And we had so much fun that we did another challenge the next week.

And the week after.

And the week after that, too.

Before I realized what’s was happening, I was getting up and regularly walking 15-20,000 steps a day. I got tired of looking at my hallway and living room, so I eventually took it outside and started walking my neighborhood.

One day, I got really brave and decided to sprint.

Rekka’s little friendly challenge had inspired me to get off my duff and get moving. I enjoyed being outside so much, and hadn’t felt any of the negative allergy effects I’d been expecting that I started dreaming on those long walks. And what I was dreaming of was turning those walks into runs.

Something I could never do, and had written off as impossible, suddenly started looking probable. I could do this. I wanted to do this.

I had a vision of myself, running full-tilt across a finish line, and so I signed up for a local amateur 5K race and spent six months training three days a week. I ran that race on December 17, 2017, at 7:15 in the morning, and I finished in forty minutes flat, such was five minutes faster than my practice times.

It was a hard trek to 5K, and I’m not ashamed to admit that I really struggled along the way. After years of asthma, allergies, infection after infection, and all the damage that the various meds that treat the symptoms do to the lungs, my biggest struggle wasn’t the running itself but the breathing. My legs were willing, but my lungs were weak. And it took the entire six months, and consistently practicing three days a week for an hour at a time, to build up from barely making it through 30 seconds of choking while I was trotting, to being able to run in seven minute stretches before needing to stop to recover my breathing.

When I got to the finish line of my 5K, I was so unbelievably proud. I did it. I beat asthma. I can run and I can breathe and I’m never looking back.

All of this is possible because I decided to begin my keto lifestyle way back in May of 2015.

I can remember just few months before I started my keto journey, being at one of the major theme parks in the area with my family and all three of them taking off running to get to the next ride before our pass times expired. I was mortified because not only could I not keep up, I felt like my chest was going to explode after just a few steps. Out came the inhaler and we barely made it to our destination in time, all because mom was seriously out of shape (and by that time I genuinely was) and couldn’t breathe. It was embarrassing, and also terrifying. I was 34 and I couldn’t keep up with my family.

I went keto very shortly after that and have never looked back. I had a vision, and decided to make it happen. And because I decided to do what it took to live a keto lifestyle and reach my health goals, my vision has expanded dramatically. Now it includes doing things I’d long written off as impossible and my achievements include gleefully running, full-tilt, across a finish line.

What’s holding you back from your finish line? If you have a vision of a better year, or even just a better tomorrow, make the decision to cross the starting line today.