Since 1850, most likely due to a lowered tariffs, taxes, and production costs, which resulted in lower prices to consumers, western society has steadily and dramatically increased the amount of sugar eaten in their standard diet. As you can see from this chart:

The two dips in consumption coincide with WWI and WWII, when the US and UK governments began rationing sugar (among other things), in order to supply the troops. The interesting thing about this chart is the little line on the right, with the black circles. That line shows the levels of obesity in percentage of population in the US and UK. You’ll notice that right around 1975ish, the rate of obesity skyrockets.

He’s a graph that expands a little on the obesity portion. Since it spans a much larger amount of time, the slope isn’t as pronounced, but notice the definite upward increase starting around 1976 and lasting 24 years. Sugar consumption doubled in that time. Around 2000, sugar usage slowed, but didn’t stop. This is due to a number of factors, not the least of which are brave doctors and medical professionals who viewed the data and realized that sugar is obviously killing people. So they stopped prescribing high-carb diets, and started prescribing ketogenic and other low-carb diets.

But that graph only covers adults. What about our kids? How are they fairing? Here’s a graph showing the levels of childhood obesity for boys and girls (aged 6-19) from 1963 to 2008. Notice the same trend as the adults. Starting around 1976, kids started getting much fatter, much faster. I propose the main culprit for that is high-fructose corn syrup. When food manufacturers bowed to political pressure to remove saturated fats from their products, the only way to make those products palatable was to add copious amounts of sugar…the cheapest, of course, being high-fructose corn syrup. But don’t forget all the “healthy juices” that increased as well. 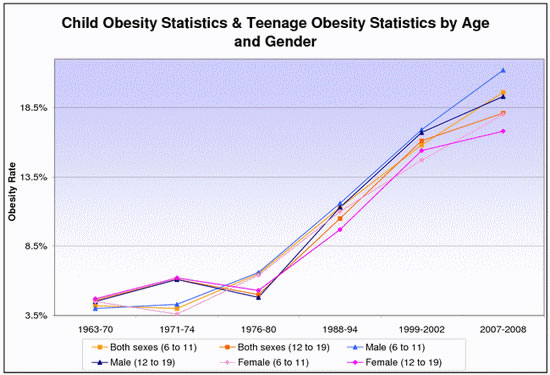 Not exactly an upbeat sort of graph.

But there is hope. The latest studies are indicating the amounts of sugar consumed by each person is decreasing. Not dramatically, but steadily. Doctors and other medical professionals aren’t the only ones beginning to realize the errors of the nutritional dogma for the past 50 years, you are, too. The reason the sugar consumption is slowly going downward is because you are buying less of it. And that, my friends, is the most powerful tool you can wield in our society to affect change. If you stop spending money on something, manufacturers stop making money on it, and the products go away.

This is already happening in the soda industry. Top soda brands are experiencing lower sales every year, and it doesn’t take much for them to realize that the market is moving away from the sugary stuff. Coke now has Diet Coke, Coke Zero, and new Coke Life (sweetened by stevia…tell me that wasn’t driven by market demand). Pepsi is introducing Pepsi True and Dr. Pepper is introducing Naturally Sweetened (both are half sugar, half stevia). It’s not ideal…but it’s a step in the right direction. And YOU are the reason for this change. Where you spend your money matters to your health, and if you spend it on good, keto-friendly foods, you’ll make the carb producers take notice.

But even if the sugar stays, you still don’t have to eat it. You can stick with what you know is healthy.