Do you ever wonder what to say to people who try to convince you that this “keto thing you’re doing” is unsafe/unhealthy/extreme? Back when I was in direct sales I used to train my consultants in how to overcome objections. Although I am not “selling” keto, I do want people to be informed and I do think many people can benefit from keto, not only for weight loss, but for numerous health reasons.

How to answer the uniformed comments people make to you about Keto:

But the body NEEDS carbs!!
Really, because science says it doesn’t. Only a minimal amount of cells in the brain and the body need glucose. Through a process called gluconeogenesis, the body can make and supply this all by itself without us ever ingesting a single carb, therefore the body doesn’t need carbs. There is no such thing as an essential carb. Essential means “necessary” and since the above is true, that our body can make the glucose it needs without ingesting carbs, that absolutely makes them not essential.

It’s unhealthy!
Really, please explain how eating real food is unhealthy and not preferable to cereal, bread and pop tarts? How are land and animal based food that mankind has been eating since their arrival on earth, unhealthy? Because diet dogma pushers that caused the epidemic of obesity, heart disease, and diabetes say so? The science has NEVER matched the dogma that is out there. If carbs are so healthy, how is it that one of the first things we lose when we cut them down and out, is INFLAMMATION? Inflammation is a reaction in the body caused by something the body doesn’t like! If carbs and sugar causes inflammation, why is it we need them?

All that fat will give you a heart attack!
Sigh. The dogma on fat is strong. Fat phobia lives. The fact of the matter is there are no legitimate studies showing links of dietary fat to heart disease. None. There’s dogma aplenty, but no facts. There is no evidence to link dietary fat to high cholesterol. Fat combined with sugar/carbs, absolutely a connection and in fact the more carbohydrates you eat, the higher the content of saturated fats in your blood. Merely anecdotal, but I have been eating Ketogenic, aka HIGH DIETARY FAT of 70-80% of my calories coming from dietary fat for over two years. I had my last cholesterol blood work up done the day before my two year anniversary and here are the results of that: 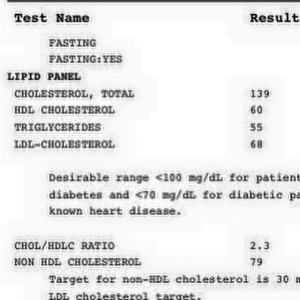 As you can see, in my case, eating lots of fat has not given me dangerously high cholesterol and in fact has lowered my risk of disease. When I was obese my doctor warned me about cholesterol more than once. No more.

You’ll lose muscle!
Oy! No, no you won’t lose muscle just because you go Keto. You will lose muscle if you starve yourself or if you go for prolonged periods of time not eating enough protein. A well formulated Ketogenic diet of very low carb, moderate protein and high fat will not cause you to lose muscle. Keto is protein sparing. According to Phinney and Volek in their book, The Art and Science of Low Carbohydrate Living, -“In short term studies, taking away dietary carbohydrate and replacing it with fat reduces our body’s efficiency in using protein. Put another way, when you first take away dietary carbs, you need more protein to maintain muscle and other protein containing tissues.  But when you observe a human over a number of weeks of adaptation to a low carbohydrate diet, most of this initial inefficiency in protein use goes away. Thus, once you are keto adapted, your body’s need for protein isn’t much higher than during a ‘balanced diet’. This is a key fact in our understanding that low carbohydrate diets used in the long term do not need to be particularly high in protein.”

Your brain needs carbs!
Actually, this one is partly true. As I alluded to earlier, there are parts of your brain that cannot survive without sugar. But they make up a small part, and they only require about 120g of glucose every day. And your liver produces 2-3 times that amount just through gluconeogenesis. Otherwise, your brain prefers fat as evidenced by the mental clarity one has when running on ketones, but even more so as evidenced by the neurological disorders that are improved when the brain is using fat and ketone for fuel instead of glucose. Studies are being done to show that ketones are helpful in the treatment and prevention of autism, ADHD, Alzheimer’s and even Parkinson’s.

Keto is okay but only for a few weeks.
Sigh. Why? ‘Because of all the reasons above. And no, Keto doesn’t have to be medically supervised either. We are made up of fat, protein and water – we need those to live, but we do not need carbs to live. Period.

It’s not healthy to cut out entire food groups.
Why not? If something causes you problems, you cut it out. Like the kid with the peanut allergy – we don’t give him peanuts. Or how about those with celiac – we don’t tell them to eat gluten in moderation. If someone has an intolerance to a food then they don’t eat it. There are millions of people with intolerance to carbs/sugar and there is nothing wrong with them stopping carbs and sugar if it makes them fat and diseased.

The bottom line is this: You have every reason to be confident about your new way of life. The science and evidence is on your side. What other people think is of no consequence to you; your life is yours to live. You live in your skin and no one else so don’t buy into the dogma that the majority buy in to.

Mary is a 44 year old married, mother of three who struggled with her weight and carbs/sugar addiction since the 7th grade.

After trying calorie counting, counting points, appetite suppressors and many other fad things over the years, she didn't find freedom until the Ketogenic way of life was introduced to her.

Over the span of 21 months she got rid of 105 pounds (260 to 155) and went from a size 20W to a size 4/6. Besides weight loss the benefits are numerous: She is med free and no more Type 2 Diabetes symptoms, no more sleep apnea, normal cholesterol, she sleeps better, breathes better, no longer has brain fog and she feels happier and healthier than she ever has.

Mary's life mission now is to help others discover the freedom and health that Keto can bring. She is passionate about inspiring and encouraging others to reach their goals.