Being Ketogenic is very specific.

It isn’t “if it fits your macros.” (I’ll explain what that means in a minute.)
It isn’t calorie counting/restriction.
It isn’t 100g of carbs a day
It isn’t “that which puts you in ketosis.”

Certain online “keto” groups can be very confusing. There seem to be so many ways to “do keto,” but the bottom line is that a true Ketogenic diet is very low carb (20g or less), moderate protein and high fat.

Keto isn’t Atkins. Atkins is Keto in Phase 1 and possibly Phase 2, but as carbs increase it is no longer Ketogenic.

Keto isn’t necessarily even Low Carb High Fat in the sense that the term “low carb” can be relative.  There are people who eat 100-150g carbs a day and say they are “low carb,” and that may be true compared to the number of carbs most people eat. But that isn’t Keto.

Keto is no grains/no sugar. It is not “if it fits your macros,” where you can eat a Snickers bar, so long as you keep it below 20g of carbs. No, no, no.

Some people might disagree, or argue that you need a caloric deficit to lose fat. Okay. Cool. I still don’t care. I’m too busy being awesome to worry about counting calories.

There are keto peeps out there who claim I won’t shed body fat or build muscle doing it that way, but I disagree. I think I have made adequate progress so far doing it the way I do it. 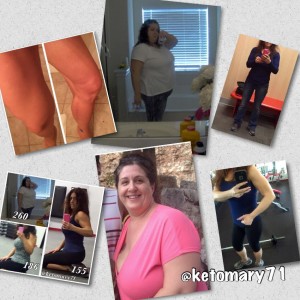 Until then, if it ain’t broke, I am not fixing it.

Mary is a 44 year old married, mother of three who struggled with her weight and carbs/sugar addiction since the 7th grade.

After trying calorie counting, counting points, appetite suppressors and many other fad things over the years, she didn't find freedom until the Ketogenic way of life was introduced to her.

Over the span of 21 months she got rid of 105 pounds (260 to 155) and went from a size 20W to a size 4/6. Besides weight loss the benefits are numerous: She is med free and no more Type 2 Diabetes symptoms, no more sleep apnea, normal cholesterol, she sleeps better, breathes better, no longer has brain fog and she feels happier and healthier than she ever has.

Mary's life mission now is to help others discover the freedom and health that Keto can bring. She is passionate about inspiring and encouraging others to reach their goals.