So, I just got back from KetoCon 2018. After a 1110 mile, one day drive (each way!), I am thoroughly exhausted, but I’m shooting some espresso right now so I can take a few minutes to tell y’all all about how amazingly awesome it was.

For those who don’t know, KetoCon is an all-keto convention held at the Palmer Center in Austin, Texas, and put on by Ketovangelist. Mr. Ketovangelist and his awesome team work insanely hard to line up a whole pile of speakers who are scientists, doctors, researchers, and experts in implementing various aspects of the lifestyle, as well as a great number of vendors who produce all kinds of keto wares. Pretty much every niche imagninable is represented, and they’re all in one place for one weekend a year.

This year was our second annual KetoCon, and through some fancy schedule finagling with my folks, who were gracious enough to take my children for the week, and finding a fantastic road trip buddy (love you, Melodie!), my non-flying self managed to make it all the way out to Austin from my humble abode in Florida. I cannot adequately express how glad I am that I did.

Since this is going to be the first in a continuing series of things I saw and experienced at KetoCon, I want to save the deets on all the speakers for when I get there, and just give some general impressions.

The first big impression I had was how kind, gracious, and genuine everyone was. In just about any community you have the “celebrities;” you know, those folks that everyone is familiar with, or that get the most traffic. We certainly had a lot of those types there, but the thing that really impressed me was how nice and real they all were. It would be incredibly easy for these big name folks to show up, do their speaking gig, and then bugger off without being bothered by the little people, but none of them did.

Pretty much all the experts spent most of their time either at their booths or walking the convention floor, chatting with folks, networking, answering questions, and just getting to know others in the community. A friend and I had an amazing conversation with Peter Ballerstedt on the possibility of implementing carnivore keto with children, I fangirled with a friend over Ivor Cummins (who was incredibly gracious about it), participated in a Facebook Live interview with Dave Feldman (who then asked to take a selfie with me, which floored me), bantered a bit about my insane drive with Dave Korunsky, got a neck massage from Jimmy Moore, and had a great chat with Dr. John Limansky about general life stuff and parenting. That’s just off the top of my head. The entire weekend was filled from front to back with getting to know these people as, well, people instead of just names on a website or voices on a podcast.

During my time working with Ketovangelist, I’ve always felt like I was just plugging away, saying my piece and then fading back into the background. I am not a shy person by any stretch of the imagination, but I am fairly introverted, and so I’m sure you can imagine my shock when I learned that the rock I thought I was hiding under wasn’t quite as much cover from visibility as I had presumed. 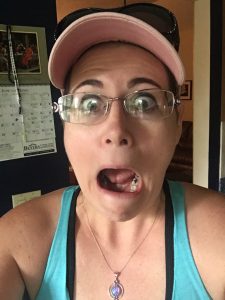 I was pretty stunned when several of the big name experts recognized me from social media, and several said they kept up with this very blog. My introversion made me want to walk around the rest of the weekend with a bag over my head. But on day two, a lovely lady came to our booth to tell me how much she enjoyed Ketovangelist and how the blog always made her laugh, and so I realized that (a) I am apparently funny, and (b) my work matters. It’s kind of easy to feel like I’m just shouting into the wind here, especially when what I do is just blogging. I’m not conducting studies or experiments, or doing research, or writing books, or designing tools for the community. And even so, my work touched someone (possibly multiple someones) and it’s helping people figure out keto not as just another diet thing they’re doing, but as part of life. Even if it only makes a small difference, that’s gratifying to me, and so I’ve come home resolved to increase my output, because if just a few people are reached or moved by what we’re doing here, then it’s worth the effort.

So, I guess this means I need to rethink the piranha-filled moat.

The last thing I want to share today, and what impressed me the most about my KetoCon experience was the strong, and close-knit community we have going here. I think I said it a thousand times over the weekend, but it truly felt like I was at a family reunion.

I’ve been working with Ketovangelist for the better part of two years now, and after so long you start to feel like you know these people in real life. The coaches, Facebook group admins, Brian, Danny, Carrie, and all the other awesome folks who work behind the scenes to make Ketovangelist what it is, well, we all chat and keep in touch as much as we can via the magic of the interwebs. To be perfectly frank, I talk to some of these folks more regularly than I talk to my parents (and that I’ve admitted that out loud means I’m probably in trouble with my mama). So, it was with great joy that I met most of these people in person for the first time and there was zero awkwardness. We all just picked up right where we left off online, without skipping a beat. The camaraderie we have, even though there is a pretty great physical distance between most of us, was just amazing.

What impressed me even more was being surrounded for a whole weekend by people who get it and understand. We came from all over the world, from different continents and cultures, and yet we all have come to the same understanding about the benefits of a Ketogenic lifestyle. Meeting and speaking to so many people- including the experts!- that have the same struggles and frustrations, the same revelations and health turn-arounds, so many of the same experiences, was inspirational to me. It made me realize that I am not alone.

That’s a big deal when almost no one around you lives this life, and most folks look at you like you’ve sprouted a third eyeball when the subject of keto comes up. At KetoCon, I was in a place packed full of people, all of whom were decidedly not going to tell me that, even though I’ve lost all this weight and my health has dramatically improved, I’m really just killing myself with that crazy diet of mine. Not one of those people told me that my children “need” carbs to grow properly, or that I am being abusive or depriving my kids of their childhood experience (yes, I’ve actually heard that one more than once) by trying to help my family make healthier choices. Not a soul in that room told me that all my efforts didn’t matter.

And that, my friends, was incredibly uplifting. Even now, almost a week later and still groggy from all the excitement, I am refreshed, renewed, and revitalized. I am amped up and excited like never before, and it’s because I know it’s not just me. I’m not crazy, and I’m not out on this limb by myself. There are many, many others here with me, standing shoulder-to-shoulder, and ready to face the world together as a community. As a family.

That, by itself, is worth every dime I spent and every hour I drove to get there.

KetoCon, y’all. If you haven’t been, go next year. Make plans to do it now. You won’t regret it.