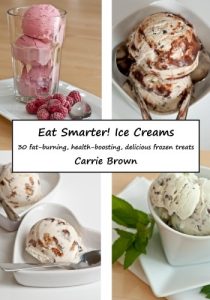 (Author’s note: I write this of my own free will. No one asked me to, and I am not being compensated for discussing this book in any way. With the exception of the photo of the book’s cover, all the pictures in this post are of the actual, finished product from amateur cooks- aka, me and a friend- and are not altered in any way. I am not a pro photographer so this is just what the food looks like when made by a regular person. Also, the opinions expressed herein are my own and not the official position of The Ketovangelist.)

I am a major bibliophile. There is nothing in the world like the look, feel, and smell of a book. In fact, my idea of a good time is a piping hot coffee with heavy cream and a trip to the bookstore, preferably enjoyed simultaneously. I’m that kind of nerd.

I also fancy myself a bit of an amateur chef, thus one of my favorite type of books is the cookbook and, in my pre-keto days, I had shelves and shelves of them. Baking, broiling, grilling, crockpot, 5-ingredient, Southern, Italian, French, Asian, Amish, method and technique, food dictionaries….I could go on and on and on. You name it, it’s incredibly likely I had a book on it. This is how much I love cookbooks.

I’m actually pretty good at cooking, if I may say so myself. I have a natural knack for flavor and taste combinations (probably inherited from a family largely composed of experts at “home style” cooking), and I’m a major auto-didact, so I’ve managed to teach myself a ton of technique via reading about cooking from the masters found in my cookbook mountain.

After I’d been keto a while it dawned on me that my cookbooks were mostly pretty useless. Much as it pained me, I donated most of my non-keto cookbook collection (excepting books on technique and such that would remain ever useful) to the local library, and that donation encompassed a minimum of seventy books. Then I dove head first into the new and exciting world of Keto and Low Carb cooking and cookbooks.

Or so I thought.

Don’t get me wrong, you can find some good recipes here and there. But what makes for a truly great cookbook is consistency: the recipes should not only be consistently good tasting (not just a few here and there) but should also consistently yield the desired results. In other words, so long as you follow the instructions, your food should look and taste as advertised in the cookbook almost all the time.

The recipes should also be actual recipes. “Scramble three eggs” ain’t no recipe, alright? But you would be amazed at just how often you find that kind of lazy junk in keto cookbooks. A recipe in a cookbook needs to consist of something that took a bit more thought than what my seven-year old can come up with and cook on her own. Otherwise, you’ve wasted my time and my money, neither of which I suffer gladly.

In my experience, I simply cannot give good reviews of any keto friendly cookbook, even the most popular ones by the biggest names on the market, because they’re just not good. The recipes largely taste bad, have really hard to find or expensive ingredients (used in large quantities, to boot!) and simply do not yield a consistent finished product. And look, I’m not even that picky about it looking fantastic so long as it tastes good. There is not a keto friendly cookbook on the market that I have tried- and I’ve tried hundreds- that yields consistently tasty meals. I’m dead serious here. And because I’m not looking to start Keto Blog Wars, I have avoided reviewing any keto cookbooks for the reasons stated above.

I tell you all this, dear reader, not because I think you really care that much about my cookbook obsession or my level of culinary skill, but so you will understand that when I tell you about the book Eat Smarter! Ice Creams by The Ketovangelist Kitchen’s chef extraordinaire, Carrie Brown, when it comes to cookbooks and recipes I am A. Hard. Sell.

Yes, Carrie is a member of the Ketovangelist family. Yes, I am, too. But I’m telling you, my experience is that keto cookbooks suck and are a huge waste of your time and money. I’ve written this extremely long preface so you will know that I mean it when I say this one does not and is not.

In fact, I am probably the very last member of the Ketovangelist Team to purchase one of Carrie’s cookbooks. And I love her dearly as a human being, so it’s not because I didn’t like her or didn’t care to support her work. While I could appreciate what she was doing, the bottom line for me is that my personal experience with keto cookbooks is so horrifically awful I simply didn’t want to waste my money on yet another keto cookbook that would end up collecting dust while taking up valuable space on my shelf that could easily go to something more worthy of my time (like Discworld books).

I finally decided to try out the Eat Smarter! Ice Creams cookbook because I was looking for something to make for my children. As I’ve mentioned in this space before, I’ve largely converted my children to the low carb lifestyle, but it’s been a hard row to hoe made even harder by the fact that finding keto-friendly recipes my children enjoy has been borderline impossible. I have a few things I’ve found here and there online (one waffle recipe, and a few muffin ones) that my kids will generally eat, but most of the friendly food I’ve made that they enjoy are my own concoctions, and even those are very much hit and miss.

One thing that is especially hard with keto kids is the peer pressure aspect. Even though my children know from our conversations the why behind our food lifestyle, the pressure to eat the same junk that the other children they know eat is enormous. So finding alternatives is a pretty big deal and has been incredibly trying for me.

That is, until I tried Carrie’s Ketovangelist Kitchen recipe for chocolate orange truffles.

Those things are good. Real good. So good that not only did my kids enjoy them, my non-sweet eating husband liked them AND he told me he actually preferred them to regular (real sugared) chocolate truffles. That’s a huge deal. After I’d made what was probably my fourth batch of these chocolates in a two week timeframe (varying up the extracts to make all kinds of awesome flavors), I decided it was time to give one of her cookbooks a try.

My son’s birthday was coming up and he didn’t want a cake. He wanted ice cream. Vanilla ice cream with chunks of red velvet cake and buttercream icing in it, to be exact.

I opened my brand-spanking-new copy of Eat Smarter! Ice Creams and set about the business of churning. I decided to try an easy recipe for my first go-round, figuring if it didn’t work I would know right off and could move on to trying something else. So, I started my ice cream making experience with the Sinless Cinnamon.

I followed all the instructions to a tee, even down to measuring the ingredients in grams, so that when it failed as I expected it to I would know it was not user error. And this is what I got in return: 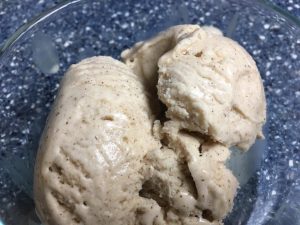 That gorgeous stuff there is the cinnamon ice cream. It came together insanely easily, churned exactly as promised, and after it froze for eight hours I dipped it- just like the “real” thing out of a store bought tub- without having to let it stand for any time at all. I didn’t even have to warm the ice cream scoop. In fact, this stuff freezes so well that I could scoop it with a teaspoon directly from the freezer container even three days later.

I cannot speak to what the scoop ability is like after three days because I have not had a batch that lasted longer. Every single ice cream from this book that I have churned has been devoured completely by my family in about seventy-two hours time.

Do I need to tell you that it tastes amazing?

After my initial success, I decided these recipes were extremely workable, and so I would adapt the Va-Va-Voom Vanilla into the requested Red Velvet Cake concoction by churning as directed and then throwing in some chunks of red velvet keto friendly mug cake (aka, a standard chocolate mug cake that I dumped some red food coloring into) and butter cream icing (butter, powdered erythritol, and vanilla). The results were nothing short of fantastic! 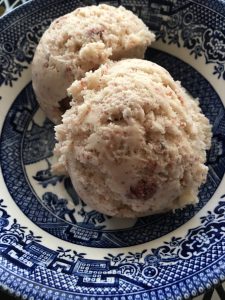 My son’s exact words were, “This tastes exactly like I thought it would!” and my children begged to eat it for breakfast the next day. Even non-keto relatives visiting for my son’s birthday enjoyed it. 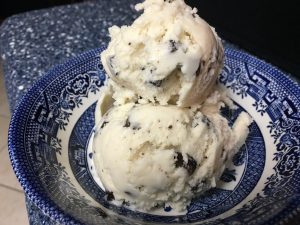 Every single one has worked exactly as advertised and tasted amazing. Another Ketovangelist Team member has tried out the Resplendent Rocky Road with enormous success, and a keto friend of mine (out here in meat space) with a self-confessed “thing” for ice cream has made both the Smashing Strawberry and the Brilliant Blueberry Cheesecake and gives them rave reviews. 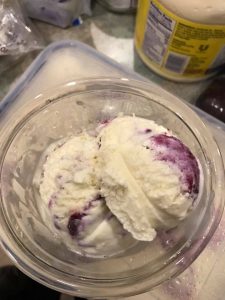 Eat Smarter! Ice Creams contains 30 different ice cream and sorbet recipes, as well as recipes for 8 mix-ins. There is a little something for just about every taste. From chocolate lovers to plain janes, from fruit-o-philes to coffee cravers and those who go nuts for nuts, Carrie has delivered such a broad variety of flavors and textures that pretty much everyone should be able to find a favorite. 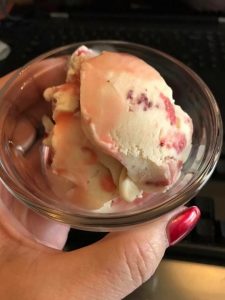 The book promises largely quick and painless assembly, and ice cream that is just like the premium brand “real” stuff in taste, creaminess, and texture. And Carrie delivers. Big time.

Making her ice cream is literally as simple as throwing stuff into a blender, running it for a few seconds, chilling overnight in the fridge, and then churning and storing. That’s it for the vast majority of the bases. There are a few, like the Va-Va-Voom Vanilla or the Mint Chip wherein she asks you to simmer some stuff for a short period just to infuse the base with the desired flavor, and some of the fruit flavors ask you to do magical, but still super easy stuff to the fruit to make it into a sauce or just so it freezes properly. But after that, it’s right back to dumping and blending. The mix-in require a little more work, but even something as complex chemistry-wise as a marshmallow has been made stupid simple- and surprisingly quick!- by Carrie so long as you follow her instructions. 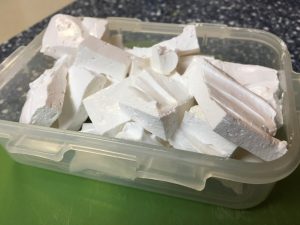 I really cannot recommend this book highly enough. I have stated to friends, family, and members of the Ketovangelist Kitchen Facebook group that, in my estimation, Eat Smarter! Ice Creams is worth every single penny, and I stand by that statement. This book has been a complete game changer in my own Keto Kitchen and Carrie Brown is now my go-to food guru. Eat Smarter! Ice Creams has earned her mad cooking respect in my book, and that’s extremely hard to come by. 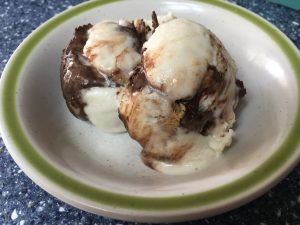 Do yourself a huge favor, and pick up a copy today. You will not regret it.

Also, take a minute to go to our sister site, The Ketovangelist Kitchen, where you can find more of Carrie’s cookbooks, and delicious keto-friendly recipes right on the website. Sign up for email updates and get new recipes from Carrie Brown right in your inbox. And don’t forget to check out our Ketovangelist Kitchen Facebook group, where you can discuss your favorite keto foods with other ketonians.