Adjusting to the Ketogenic diet and lifestyle is a process, and, like any other process, there are some learning curves and speed bumps. These curves and bumps can lead to frustration and disappointment, but they don’t have to. I’ve put together a list of what I see as the most common keto mistakes (and what you can do about them).

On the surface, this might seem a little contradictory to some of the other items on this list, but hear me out for a second. The mistake isn’t tracking your macros. The mistake is OBSESSING over your macros. The biggest psychological benefit to keto is the freedom it provides. You’re no longer shackled to the hangry, sad existence filled with constant food preoccupation. You’re free to live. So don’t shackle yourself by fretting and obsessing about macros. You aren’t eating macros, you’re eating food. Make sure your food is keto-friendly, and you’re going to be doing just fine.

I’ve written about this before, but it’s important enough to repeat. The number on the scale is the least important metric you can use to gauge your success. This is another pet peeve of mine that is similar to the previous mistake. Enjoy the freedom of your life, don’t fret about the number on the scale. The scale is always a snap shot of what happened two weeks ago. Think about it. Aside from water, which can fluctuate many pounds in a short period of time, in order for you to gain or lose weight, it requires time. The scale doesn’t tell you important information. Don’t sweat it.

Protein is, probably, the most important macro, because it is essential (we cannot manufacture all the requisite amino acids) and it is required to build and rebuild all of our soft tissues (muscles, organs, etc.). However, too much protein can sabotage your efforts to reach ketosis. The reason for this is that for every 100g of protein, 56g can be converted to glucose. So if you eat way more than you need, the excess will be converted to glucose. Another great thing about keto is that it is “protein sparing.” That means that nutritional ketosis will KEEP protein in your body, and not strip it away (like high-carb foods).

This might seem like a strange mistake to make when you’re choosing to eat a high-fat diet. But, surprisingly, many people still fear the fat. Look, going from a lifetime of low-fat to a diet of high-fat is a paradigm shift that isn’t necessarily easily achieved. So a lot of people still feel weird about unrestricted fat intake. To that, I can only say: Trust the keto and enjoy the fat. Because of the unique biochemical responses your body has to dietary fat, it’s highly improbable that you can eat too much of it.

It’s not enough to eat lots of fat. It has to be the right kinds of fats. In short, stay away from vegetable and seed oils, the kind in the plastic containers. They are extremely unhealthy and will sabotage all your efforts. You should be eating saturated fats (animal fats, butter, coconut oil), fish oil, and monounsaturated fat (olive oil).

Keto is about whole food, real food, actual food. Think of it this way: 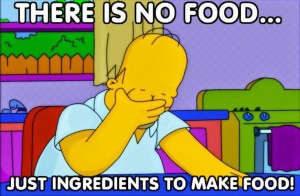 You should be eating ingredients. You should not be eating stuff that comes in individual wrappers. Quest bars, Atkins bars, and the like are not actual keto foods. They are distractions and setbacks. They are candy bars dressed in “approved” clothing. That’s not to say that you should NEVER have one. Sometimes it might be the best you can do, but the MAJORITY of your food should be real food, actual food. You know…ingredients.

I get questions about cholesterol more than almost any other. It’s understandable. For the past 50 years, you’ve been inundated with the myth that cholesterol is dangerous. It’s a myth. Cholesterol is the opposite of dangerous. It’s essential. Every cell in your body needs cholesterol. Having “high” cholesterol has no correlation to any sort of heart or cardiovascular disease. There is absolutely NOTHING to worry about, as it relates to high cholesterol levels. The reason we think there is a problem is because of Ancel Keys, and his diet-heart hypothesis. Simply put, the diet-heart hypothesis posits that higher levels of cholesterol (particularly due to a high saturated fat diet) has negative effects on heart and cardiovascular health. He made this assertion with no real evidence, and he later rejected it. Yes, the man that made us afraid of cholesterol actually rejected the very hypothesis that made him famous. You can reject it to.

I’m not going to spend a lot of energy on this one. Keto is not a quick-fix diet. It’s a lifestyle change. If you think you can “go keto” and drop a few pounds and then go back to how you were eating, please move on. I don’t have time for you.

Keto is not for the half-hearted. You have to commit. It requires real determination and grit. You’re going against the grain (pun TOTALLY intended) and you’re choosing a way of life that is difficult for the majority of society to understand. You cannot sit on the fence. You absolutely must be all in or all out. From a practical perspective, choosing to eat high fat AND high carb (not committing fully to keto) is a dangerous combination. You’re choosing the worst possible scenario and risking your health. The answer, of course, is to commit fully to keto and reap the rewards of focused determination and discipline.

Stop. Just stop. Someone else’s progress is not a determining factor in your success. Everyone is different. We all gain and lose fat in different areas and at different rates. If you find yourself constantly basing your success on someone else’s progress, then you’re doing it wrong. Just because Skinny Sally lost 100 pounds in a month doesn’t mean you are a failure if you haven’t. Just because Thin Thomas cut his body fat to 10% doesn’t mean you are a failure because you haven’t. Everyone is different. You have to learn what works for you. But I can assure you, what doesn’t work is trying to compare yourself and your success to other people. That’s a recipe for disaster.

I’m seeing this more and more. Electrolyte (salt) imbalance is a big deal for keto folks. We’re so used to avoiding salt, because too much salt in an inflamed body will be VERY bad. But when you’re keto, you don’t have an inflamed body, so your body NEEDS more salt. So you need to make sure you are getting that salt every day, at least 2 tsp. And magnesium. And Vitamin D. Those are important. Most of you will get plenty in your food, but if not, make sure you’re supplementing adequately.

I’ve talked about this before. Making a change in your life this massive is powerful, and it’s very difficult to sustain if you aren’t prepared. You will be much better off with a supportive group (it doesn’t have to be a massive group) of people who understand your struggle, understand your success, and understand your journey. Find someone who can be there to help, to admonish, and to walk with you. If you’re not already in the Ketogenic Success Facebook group, you can join today. We’d love to have you.

Okay, so those are the most common mistakes I see with folks doing keto. Some of them are psychological, some are practical, and some are emotional. Mistakes aren’t bad. They are how we learn. So learn and correct these so you can achieve your goals.